"Eureka," or so said Archimedes when he made his exciting discovery (look it up.)

I told you I had hit a family history brick wall - a mystery I couldn't figure out. I told you that I would solve it sooner or later. Well, it was sooner, I guess. And I told you that you'd be the first to know. So here it is - the end of the story of Catherine Broadfoot (Boyd) Dolan, who had just disappeared on me from the Dolan/Sweden story. But she has been found.


WHO IS SHE?
The relationship calculator on my Family Tree Maker software says that officially she is "the wife of husband of great grandmother." Mmmm ... okay, that's not too helpful. Try this. She is the first wife of William James Dolan, my step great grandfather who remarried Augusta (Jonsson) Ljungberg, my great grandmother. So Catherine is related, but not really by blood. But she is an interesting story, if not a sad one. And she has been a thorn in my genealogical side for more than 20 years.

Catherine was born in Irvine, Ayrshire Scotland. It is an industrial town on the west coast of Scotland, in North Ayrshire some 26 miles from Glasgow. That makes sense as her father made his living as a fisherman. One census reports that the Boyds live on the Quay. A quay is like a pier or wharf on the water, a place for loading and unloading ships. When she got married Catherine and family were living on Harbor Street.
Catherine was one of 7 or 8 children of this fisherman and his wife, Margaret (Findley). As the calendar was about to turn from 1887 to 1888 Catherine got married to William James Dolan. She was 17 years old. He was 30! The how and when and other circumstances of how they met and decided to get married I don't know. She was living in Irvine and he was a lace weaver in Newmilns (some 14 miles away.) Both her parents were dead, and she was living with relatives. But don't judge too harshly. You can't look at 19th century circumstances in a different culture with 21st century American eyes. It was what it was. But look at the picture below, taken probably at the time of this marriage, and you will see this young gal who became the first Mrs. William James Dolan.

SO WHAT WAS MY MYSTERIOUS PROBLEM?

As I asked in a previous blog story (19th Century Faves - Sweden Edition), "what happened to Catherine?" I checked census and death records in Scotland. She didn't return home to live, and there is no record of her death in Scotland. I assumed that something happened to her in Sweden and she died, but all attempts to find her proved fruitless and so I had no proof. And that's the way it stayed for many years - a gap or unanswered question in the Dolan family story.

But for some reason or another, I decided to try again. With the help of a new friend (see below!) who was not hindered by the language barrier and who knows the Swedish genealogical resources in and out, the missing Catherine Dolan was found, and I had my proof. The entry below, in a parish record of deaths for 1892, states that Catherine Dolan, wife of William Dolan, British subject from Scotland, died on August 3rd and was buried four days later on the 7th. The record goes on to say that the cause of death was tuberculosis.

The poets might call them star-crossed. Call it whatever you like, but the Catherine and William match just was not to be. In five short years a 17 year old orphan goes from becoming a teenage bride, to a new mother, to a grieving immigrant, and finally falls victim to a fatal disease at age 22. In less than a decade, William marries, buries, immigrates, buries again, marries again, goes from being childless to being a step father of five and birth father of three more. He returns home and before long buries his mother and then another child. (That too is another story.) With the 20th century being just over two years old, William and new wife Augusta have three more children. And you thought you were busy!
MISLEADING TITLE
My title for this post is misleading. Eureka means "I" found it, but that's not entirely true in this case. I did get help. Meet my new Swedish friend, Yvonne Hendriksson. She lives in Sweden and lives for family history. By chance I came upon her website (www.swedenroots.se)  and it looked interesting. I explained to her my Catherine problem and she looked into it. The information I first gave her led her to the same place I had been for years - no Catherine. But I was persistent, and she got interested. I gave her more information and sent the pictures, and well, Eureka. Yvonne finally found Catherine Dolan. As it turns out my search for Catherine, my pictures of Catherine and William, and my picture will find their way onto Yvonne's website. That's fun! Thank you, Yvonne! 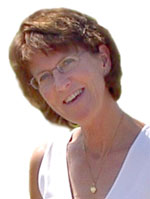